Whilst hunting for Magnitude EK I cam across an “unknown EK” from the Magnitude Gate. It’s hard to say if it is an EK as it only appeared to use one exploit however it;s similarities to Magnitude were close. The gate returned 404 many times until one day it delivered. Magnitude currently has two gates. The first is on the compromised website which crafts a URL using random numbers, screen size and the referrer (a thanks to @Ledtech3 for deobfuscation).

At first I hit Magnitude EK which filled my screen and processes with scheduled tasks and ultimately failed to download a payload. I’m not sure if this was my hosts problem or a malfunction with Magnitude EK. After PseudoDarkleech gate has seemingly disappeared which always delivered Cerber ransomware then it is possible that Cerber is no longer delivered by Magnitude and that they may be making changes.

The unknown EK I witnessed appeared to be in a testing phase. My first run showed that it had a very easy to read landing page and lots of logging. The 2nd run it was obfuscated a little and did not log. Both times a 1kb executable was dropped which may act as a loader for more malware.

It is possible this EK is testing being performed by the Magnitude EK threat actors. By the fact that it did successfully drop a payload and execute it and that Magnitude seem to fail suggests there could be problems with the EK. I have not enough visibility of Magnitude to report on payloads that it has been dropping as of the last 5 days.

Anyway, it’s always interesting to see something different. Hope you enjoy the pcaps and pictures. 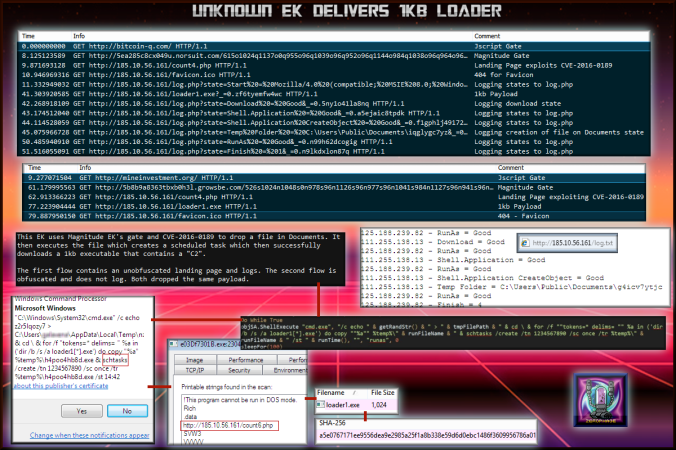 Unknown EK creates a file in Documents and runs a scheduled task which downloads a 1kb loader. 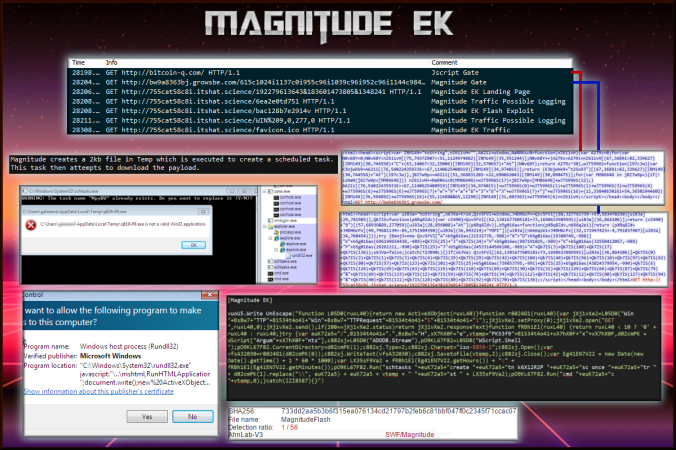 Magnitude EK creates a file in temp which contains a command that creates a scheduled task and downloads a payload. In this case the payload failed to download.