I had previously done analysis on the compromised website on 2nd January. I thought I would try it again to see if there were any differences. The website still contains the PseudoDarkleech gate which is delivering Cerber.

My setup did not deliver Cerber ransomware however the Cerber Check In UDP traffic was observed again. I put the payload through an online sandbox to see what would happen and found the exact same result. The payload did not create a file with a strange extension as I have previously seen so the function of that file is unknown.

I have been unable to find an answer as to why Cerber creates the UDP traffic. It is possible the payload has other functionality such as commands to a bot net to perform DDoS or the Emerging Threat signature is a not a false positive and it is an action of the infamous Conficker.

When the callback domains for Sage didn’t resolve in DNS, the infected host sent UDP packets sent to over 7,000 IP addresses.  I think this could be UDP-based peer-to-peer (P2P) traffic, and it appears to be somehow encoded or encrypted.  BleepingComputer’s September 2016 write-up on CryLocker shows the same type of UDP post-infection traffic, but CryLocker’s traffic was not encrypted. 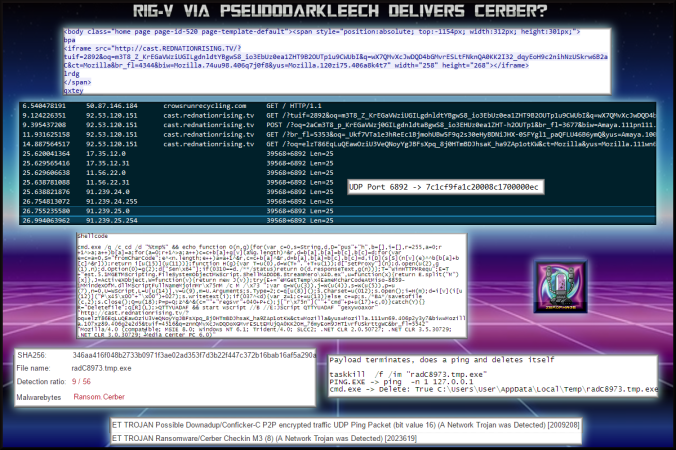